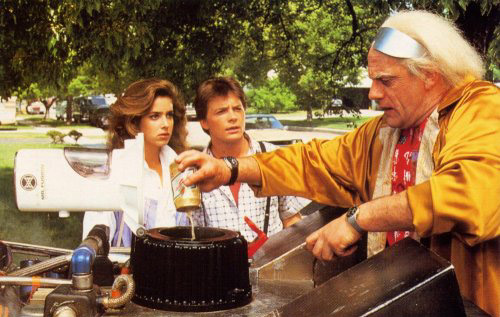 Alan Boyle's Cosmic Log is one of my favorite geek blogs. He recently wrote a review of a new book called Physics of the Impossible. I won't rehash all he wrote - please go read Alan's post for that. But the gist of the book is that there are three classes of impossibility. A Class I impossibility is something that doesn't violate any known laws of physics; we just don't know how to do it yet. A Class II impossibility is one that requires some new science - theories that might be true but we don't know yet. A Class III impossibility clearly violates known laws of physics. Unless the theory is wrong, these items are truly impossible. (I might add that they are impossible for us, but not for God, of course. He is not constrained by the laws of physics that he invented. But that is a subject for Believer's Brain.)

Since I read that a few days ago it has been bouncing around in my head and has bumped into something else I mentioned recently: Dense Plasma Focus fusion. Building a device to generate net power by controlled nuclear fusion is, currently, a Class I impossibility. We think it should be possible, but we don't know for sure how to do it yet. In fact, there are several possible approaches that have been investigated. Two of these have received by far the most funding and attention: magnetic confinement and inertial confinement. Billions have been spent, and continue to be spent on developing these ideas. It's appropriate to spend billions on fusion power research, because long term it is probably our best source of clean energy. Unlike nuclear fission, on which all current nuclear power plants are based, fusion does not inherently require a radioactive fuel or generate huge amounts of radioactive waste (although some types of fusion are cleaner than others).

A few years ago some scientists generated a huge stir with their claim to have produced "cold fusion". This was tabletop physics. No huge magnets or high voltages or high temperature plasmas. Cold fusion is a Class II impossibility. If it's real there's some new physics involved that we don't know about. Unfortunately, subsequent attempts to replicate their results did not meet with much success. Most scientists reluctantly concluded that cold fusion doesn't really exist. It was all a matter of experimental error.

A while back the blogosphere became aware of the work of Dr. Robert Bussard to develop a new wrinkle on an old approach to nuclear fusion: inertial electrostatic confinement. There's no doubt that this approach can generate controlled nuclear fusion and there's no controversy about how it works. The only question, the Class I impossibility, is whether it is possible to build a device based on this principle that generates net energy. If you're going to build a power plant, you have to get out of it more energy than you put into it. That's usually called "breakeven" and nobody in the fusion business has yet achieved it, even the big boys spending billions on magnetic confinement.

Sorry for rambling on. I needed to give you some background in case you haven't been tracking what's going on in the field of fusion research. Now, finally, to the point I wanted to make. I've been aware of Bussard's work on inertial electrostatic confinement (IEC) for a while. I just recently heard about Dr. Eric Lerner's work on dense plasma focus (DPF) as another way to potentially achieve breakeven fusion. Both of these approaches have the potential to result in smaller, cheaper and cleaner fusion power plants than what the big boys are doing. It caused me to realize that maybe IEC isn't so strange after all. If there are two alternative approaches, how many more might there be? After all, we are "only" dealing with a Class I impossibility here. Are there other principles for confinement that might yield an efficient fusion reactor?

Fusion is potentially so important to the future of our economy, environment and national security that it is almost criminal for our government to be so narrowly focused in our research funding. Both IEC and DPF have struggled to gain any funding at all in the U.S. And these are not totally crackpot ideas. No one denies that both have achieved nuclear fusion. It is only a question of whether it is possible to build a device efficient enough to produce net power economically. Why should we not be investigating all avenues? I don't want to take away research funding from other possible energy sources, fusion or not. Solar energy, ultracapacitors and the like have great promise. When you consider what is at stake we need to be putting more money into all of these. But we need to remember that most of the really big advances in technology have come out of left field, so to speak. So spending a small amount of money on even the apparently less promising approaches seems like a good investment. Hmmm. I might need to write my congressman.
Posted by Bill Hensley at 11:14 AM

My position exactly. Too many eggs in the biggest basket.

BTW Congress is listening. Sort of. They have cut back on ITER. So far no corresponding increase in small fusion.

BTW I currently know of 5 to 10 IEC ideas that might be viable.