It's been a long time since I posted our progress on the self-balancing robot project. As you may have guessed, that's because it's been a long time since we worked on it. Our first attempt didn't go all that well, and we both got busy with other projects. Recently Alan and I have been wanting to jump back in and try again. This report will describe what we learned from our first attempt.

As you may recall, last time I reported that the robot was able to roll around and respond to commands from the remote control. We had two problems, however. The first was that one wheel started turning immediately after we switched on the power. It would continue to turn for a couple of seconds until the Arduino microprocessor finished booting. Our proposed fix worked well. We installed a couple of pull down resistors to hold the control line low until the computer began driving the signal low. (They were hard to add, though, because the finished breadboard wiring was very messy. That's another area we want to improve next time.)

There was still a question about how the motors were drawing any current when the USB was connected to the Arduino but the battery wasn't. After some discussions on the Arduino message board, it was decided that indeed there would be some voltage on the VIN pin if you applied power to the 5V pin. So that mystery was solved. With all of that, we now had a dandy little remote control car.

However, we were a long way from a self balancing robot. The second problem was more fundamental. The motors clearly didn't have enough speed and/or torque for the robot to do a "wheelie". If it couldn't raise itself up on two wheels to start with, there was no way it was going to balance on two wheels. We tried increasing the voltage by switching to 8 AAA batteries instead of 6 AAs. But it was nowhere near enough. On top of that, after we had made a number of attempts to fix the problem the motors began to turn even more slowly. One wheel, in particular, was turning very slowly. We checked the voltage across the motor leads and that wasn't the problem. Clearly the motor itself was failing. So the bottom line is we are going to need new, more powerful motors. The ripple effect of that change will result in several more design changes. For instance, more powerful motors will draw more current than the current H-bridge can handle. They also may not fit in the same location on the chassis. At that point we realized we were going to need a Rev 2 on the whole design.

It's not all bad news, however. Here are the things that went well:So we actually managed to build a remote controlled car from scratch. That in itself was fun and rewarding. To close, I finally have a few pictures to post so you can see what we built.

Here is the robot all assembled. Do you like the racing stripes? We were experimenting with AAs versus AAAs, so we had rubber bands holding the battery packs on: 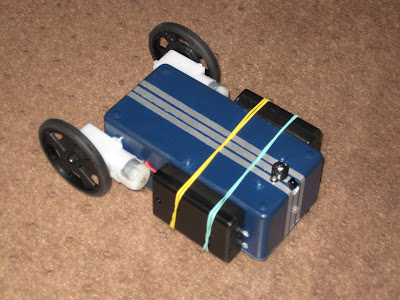 This is a closer shot of the front end showing the roller that serves as the front wheel (there's one on each side) as well as the IR remote control receiver and an LED to indicate system status: 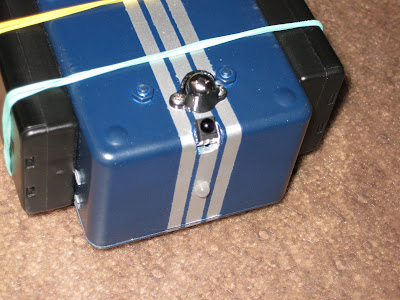 And here is a closer shot of the back end. It shows the power switch as well as the USB port used to program the Arduino. The small black button is a reset button. We never needed it because the software worked great: 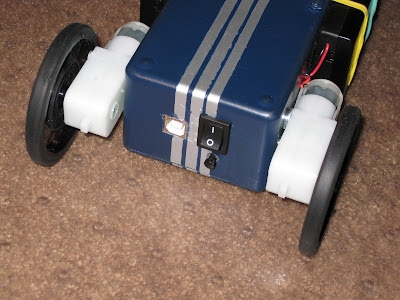