The robot is rolling (literally)

Last weekend Alan finished assembly of the self-balancing robot, Rev 1. This first version isn't supposed to balance on two wheels yet, just roll around on three wheels. It works! Well, sort of. We have some debugging to do, and some design changes are in the offing. I still have no pictures to post, for which I apologize. Alan has the camera and I haven't had a chance to upload them.

It was pretty exciting when we first powered it up. Alan plugged the Arduino into the USB cable so we could download the software, and immediately one of the two wheels started turning! It didn't stop until the control program was finished downloading and booted up.

Now, mind you, I was pretty shocked because we hadn't connected the batteries yet, and the motors are supposed to be getting their drive current from the batteries. Somehow they were getting 5V power from the USB via the Arduino. I was concerned because the Arduino can only source 40mA from each pin and if we were drawing too much current it might be damaged. We discovered, though, that if we go ahead and unplug the USB and run from the batteries, the wheel still turns a couple of seconds, but then everything seems to work after it boots. We can use the IR remote control to drive it around on the floor. Pretty cool!

So now I have several questions to investigate:

1. How can the motor draw power from the USB through the Arduino?
2. Why is it only one motor that turns at power up?
3. How can I fix it?

Here's the circuit diagram (click for a larger version): 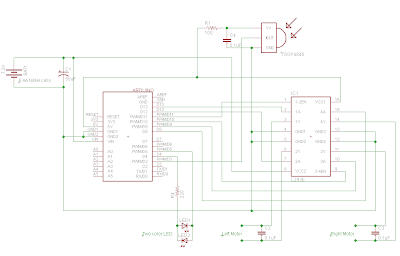 I think we can probably keep the wheels from turning at power on by adding pull down resisters to the enable lines on the H-bridge. I'm guessing the enable pin voltage is basically drifting until the Arduino drives it low in the setup routine. But I really don't understand how the power is getting to the motor. I hope to get some help from the Arduino user forum.

Aside from the mystery of the spinning wheel we have one major design issue. The motors I selected have plenty of torque, but not nearly enough speed, for the robot to lift itself to a vertical position. We are looking at ways we can address this short of simply buying different motors. The first thing we want to try is to get a little more speed out of the existing motors by upping the voltage. We intend to replace the six AA NiMH batteries with eight AAA NiMH batteries. This also makes the robot lighter. Eight cells will give us a nominal 9.6V, which after the 1.4V drop in the H-bridge becomes 8.2V. This is substantially higher than the net 5.8V we have now. The motors are supposedly rated at 12V, although I'm pretty sure they would overheat quickly if driven continuously at this voltage. But it will only take a fraction of a second for it to raise itself to vertical.

We'll try the pull down resisters this weekend, but we're waiting for parts to convert from AA to AAA batteries.
Posted by Bill Hensley at 10:19 PM

What about using bigger wheels? That will give you more speed, but require more torque (I think).

Yes, I thought of that, too. It does seem like it would help, as long as you have torque to burn, which I think we do since smaller batteries will make the robot lighter. Another idea is to increase the size of the front caster or shim it, so that you start off already tilted up some.

The pullup resistor worked great to stop it from spinning on a reset. I received the new battery cases and the AAA NiMH batteries I ordered, so we're ready to try that, too. We'll take this one step at a time, I think and see how far we get with more voltage and lighter batteries.